Weekend Recap: Why We Can't Have Nice Things

On Saturday, Badger somehow managed to split an antler in half and eat all the marrow. 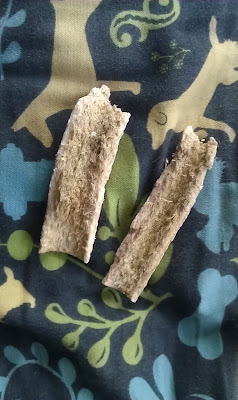 This is not the end of antlers, but apparently he will need a little more supervision than we originally thought. So we're back down to two things we can leave him alone with: frozen Kongs and Chew Gourmet bones. Everything else either won't hold his interest or gets destroyed.

On Sunday, we attended our monthly dog play group. Badger found a blue stuffy and became overly protective of it. We eventually had it hide it from him. Mushroom tried to play with dogs more than twice her size and didn't seem to notice and/or mind getting bowled over. Then she pooped on the floor (she had refused to poop before play group). At least they came home happy, though they continued to play for about an hour at home before getting tired enough to nap.

Has your dog done anything to embarrass you recently?
Posted by Rebelwerewolf at 9:33 AM